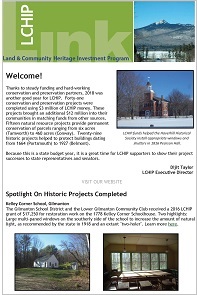 Each month, LCHIP publishes an e-newsletter to provide information about LCHIP - news, grant round dates, and exciting new projects. Click here if you would like to join the LCHIP mailing list and receive the LCHIP monthly e-newsletter.

Read/download any of the newsletters below (all in PDF format)

May 2020 Newsletter - Application Materials for 2020 Grant Round Posted

May 2018 - Spotlights on Greenfield Meetinghouse and Beye-Pendelton

October 2017 - Spotlights, Road Trips to Seven to Save and Emery Farm

July 2016 - LCHIP Update, Spotlights and Road Trip to The Fells